One of the most unique houses built in Refugio (403 East North St) is the Agnes West home. This house,

built in 1910, was first occupied by Mrs. Agnes West, a daughter of Johanna Whelan and John Thomas O'Brien.

This Colonial Revival Style house became popular in Texas from 1900 until World War I. Following the Victorian era in houses in America, it had been introduced in Eastern cities in the 1880's.

The Woodworth house is more commonly called "The BalleyGarrett" for the town in Wexford, Ireland from 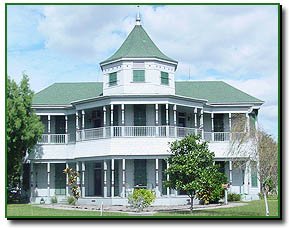 which many of Irish colonists came to Refugio. The house was built of long leaf pine in 1900 as a one-story house. The lumber was hauled by horse-drawn cart from the nearby seaport of St. Mary's. In 1907 a second story, with the same floor plan as the first, and a back section, on the ground floor, were added.

The stairway to the second story is partially framed in grillwork with a handrail and spindle posts on one side. Ceiling upstairs are 12 1/2' and 13 1/2' down-stairs.

The house was built for Mr. and Mrs. Louis Henry Woodworth. She was the a granddaughter of James Power, Texas Irish Empresario, who colonized Refugio County in 1834. Power was also a signer of the Texas Declaration of Independence.

Original owners of this home were Allen and Martha Heard.They came to Refugio County around 1850 from Alabama. This

home was originally just south of the town of Refugio and was built in the 1850's. In 1900 it was moved in sections to its present location (east end of Ymbacion St.) Mr. J.F.B. Heard (a son) planted oaks around the home; thus, the name Oak Lawn was given after his death.

The house was built in the Greek Revival Style which later developed into the Southern Colonial style. Oak beams used in the construction were brought from Portsmouth, England while cypress planking was brought from Georgia and Louisiana. The large entrance hall is paneled in wide-board, beveled wainscoting about three feet high. The front door has large, diamond-shaped, leaded glass panels on both sides. Wainscoting is carried up the banistered stairway to the second floor and is also in the dining room.

The Major John Howland Wood Mansion stands on a bluff overlooking Copano Bay in Bayside, which was

once called Black Point. The house was built in 1875 of Florida long-leaf pine. Timbers for the large, two-story, classic revival structure came by sailing vessel from Florida. The two porches or galleries in front, supported by tall columns with classic entablatures, mark it as Greek or Colonial revival. There is a widow's walk or gallery on the rooftop. Open fireplaces exist on both sides of the house and on both floors.

Furnishing for the home came by schooner from the east and provided a fine setting for the weddings the the Woods' daughters all of whose weddings took place there.

The house later became known as Cook's Hotel in Bayside and was a popular resort of bay area residents.

Alongside hwy 77, 2 1/2 miles south of Refugio, stands the Frank Booth Rooke House. The house is a three story

building built in the Victorian style in 1905. From the widow's walk on the roof  one can see nearby Refugio and Woodsboro. Access is gained by pulling out a hidden stairway.

Another unique feature of the house is that there are two closets, one on the first floor and one on the third which are accessible through two adjacent rooms. There are seven fireplaces, a living room, sitting room, dinning room, den, game room, billiards room, four bedrooms, four baths, and various other rooms. Some of the windows are stained glass

The house remains much as it was during Mrs. Rooke's tenure with the exception of the addition of an elevator in the 1930's. It has remained unoccupied since her death in 1944.

The Power House was built for Philip Power (younger son of empresario, James Power) in 1888. Square

nails were used  in the construction of the house. Cypress used in building the paling fence around the house was brought in sailing ships from New Orleans. Located at the corner of Empresario and Alamo streets, It is one of the first sites to greet visitors as they enter Refugio from the south.

The floor plan of the seven-room, two story structure has not been changed, but the southeast porch on the second floor in the rear has been enclosed and electricity has replaced kerosene lamps, along with the addition of other modern conveniences.

Originally occupied by Mr. and Mrs. Philip Power until their deaths in the 1930's and then by their son John J. Power who never married, it finally became the home of nephew Wallace Shay in 1957.

Located in the 900 block of Commerce street this home, named for the large Anaqua trees which grace its grounds, is the 1940 remodeled version of the 1902 home built for rancher Mr. and Mrs. Oscar Mitchell. Built in a

traditional Victorian style, it replaced an earlier structure built by Mrs. O'Brien's grandfather, Michael Whelan. That structure is believed to have been the first large frame building in Refugio.

Mitchell's ranching interests are still operated by his descendants today. One of Mitchell's daughters married an oilman, William Joseph Simmons, who came to Refugio with the "oil boom" of the 1920's. They inherited and remodeled the house in 1940.

The Simmons decorated the home with fine antiques, oriental rugs, chandeliers and other exotic furnishings.

Located in the 100 block of East Plasuela in Refugio, the Strauch house was built as a family home in 1910 by George Strauch, founder of George Strauch Lumber Co. Strauch built many of the outstanding structures in

Refugio including Our Lady of Refuge Catholic Church. The house is an example of Colonial revival style architecture with classic Greek Ionic columns.

Outstanding features besides its sturdiness are its interior woodwork and staircase. The large entrance hall is wainscoted with polished curly pine four feet high, and has a cornice, a molding twelve inches wide, hand made by Mr Strauch himself.

Built in 1899 by Clinton Heard, this later Victorian two-story structure became the home of Mr. and Mrs L.R. Jeter in 1926. It is constructed of cypress wood and contains floors of Florida pine which were placed by the Jeters. Mrs E. L. Jones, the Jeters' youngest daughter, sold the residence to Mr. and Mrs. Sam Reilly in 1982.

The Reillys restored the home to its present state. For a brief time the structure was used as an upscale tearoom.

The house is located on Power Street, behind Our Lady of Refuge Catholic Church on the banks of the Mission River.

This fine old, well maintained home is located at 1003, Commerce Street, Refugio. This home was

occupied by John J. O'Brien and his wife, Fern Dolores Ohler O'Brien until their deaths.

It was originally built in 1930 with an additional two wings being added in 1940. It was furnished with many imported collector items and was know far and wide for its elegant furnishings.

Notice the statues of the two lions that grace the entrance to this home located on the same street and approximately one block south of the Mitchell "Anaqua" house.

This two-story Victorian mansion at 809 S. Alamo, was originally built by Ben Shelton who first started a business at Blanconia in Bee County. A little more than two years later he moved his stock of goods with 18 wagons to Refugio, and

there set up as a general merchandiser in May, 1907. He owned two business buildings, farm lands, along with oil and gas interests.

In 1907, Shelton built a "little bungalow" that was located to the north of the current Shelton house. In 1927 the bungalow was moved to the present location and additions were started including a second story.

Shelton was a self made man, having attended a private college in Portland, Texas and later graduating from Alamo City Commercial College. He began work as a clerk for only $15 per month.

The house was built in 1905 for Mrs. James (Rosie O'Brien) Lambert, daughter of John Thomas O'Brien. It had been built as a two story house with a turret on the northeast corner and a tower at  the center. These were later removed to make a

three story house and they were replaced by a gabled roof and dormer windows. Also, porches on the first and second floor were extended around the octagon bay on the north side.

When the home was built, it had a most curious roof line. This type of roof line and finishing is characteristic of the Late Victorian or Queen Ann Style.

Due to a fire in the late 1930's the roof was lost. Rather than restore the roof, it was decided to modernize the home's appearance and to create a large room on the third floor which spans the length of the house.