The city of Refugio, Texas (population 2941) is the county seat of Refugio County. Entering Refugio from the south, one is immediately greeted by the sight of historic old homes and the iconic  symbol of all Refugio County, Our Lady of Refuge

Catholic Church. From several miles away its majestic steeple rises above the tree line, beckoning the visitor to this small, tranquil Texas town.

The Refugio School system is considered excellent and has produced many professionals. Graduates excel in such fields as business, engineering, medicine, mathematics, science, and computers.
Refugio fans are second to none in their enthusiastic support of teams

ranging from little league to the state football playoffs.  Girls sports are also well represented as evidenced by advancement to the playoffs in basketball, volleyball, and softball.

It is quite common to see top athletes also excelling in the classroom. Refugio is well know for prowess in UIL competition, producing state level champions in diverse fields ranging from computer science to literary criticism.

Refugio ISD has just recently completed new construction on two separate campuses as shown in the photos below: a new Junior High School (7th & 8th grades) and new additions to the primary school. 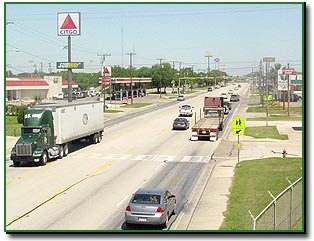 that were first developed in the 1920's. Oil field related service companies abound and provide much of the employment.

Refugio also serves as a bedroom community for those employed in the larger adjacent cities of Victoria, Beeville, and Corpus Christi. Many of these citizens prefer the real sense of community felt in Refugio and having their children educated in a smaller community, thus escaping the problems often associated with large cites and school systems.

In 1793 Nuestra Senora del Refugio – Our Lady of Refuge – Mission was established at the confluence of the San Antonio and Guadalupe Rivers, but because of an Indian raid, moved in 1795 to what  is now Refugio, giving both the Town and the yet-to-be founded County a name.

On March 14-16, 1836 the Battle of Refugio was fought by local rancheros under command of Captain Amon B. King and William Ward, during the Texas War for Independence from Mexico. After Independence, Refugio was one of the 13 original counties of the Republic.

An Act to incorporate the Town of Refugio:  “Be it enacted by the Senate and House of Representatives of the Republic of Texas in Congress assembled, that the citizens of the Town of Refugio, known as the Mission of Refugio, be, and they are hereby declared a body politic and corporate by the name and title of the ‘Town of Refugio’, and by that may sue and be sued, plead and be impleaded, and may hold and dispose of real and personal estate in said town…”.  Approved on the 1 st day of February, 1842 by Sam Houston.  And adopted revised provisions in 1918 as a Type A General Law City with a Mayor/Council form of government.

The present City Hall was built in 1936 and currently serves as the general offices of the Town of Refugio.  This includes

the Mayor’s office, City Secretary, Park and Street Superintendent, Water and Wastewater Superintendent Offices.  Also, the Refugio Water Works and Refugio Municipal Court as well as the Council Chambers, along with rental rooms known as the Club Room and the Ball Room are located within.

A notable collection of photographs are on display in the Club Room.  The collection is entitled “Cryin’ for Daylight” and are from the book by Louise O’Connor which is a tribute to the ranch hands and ranchers of the Refugio area.

Recreational opportunities abound in the town.  The city maintains three parks.  First, is King’s park which has a monument to Captain Amon B. King and the 1836 Battle of Refugio.  Next is Heritage Park.  This park houses the fire station, Chamber of Commerce, Refugio County Museum, future RV park, and the Refugio High School baseball field and Refugio Little League baseball and softball fields.  Last but not least, is the Lions/Shelly Park.  In 1998 a million-dollar matching grant project with the Texas Parks and Wildlife Department was completed.  Major renovations to Lions/Shelly Park included the addition of the 15-space Jeter RV Park, a fishing pier, nature trails, covered pavilion, playground equipment, restroom and shower facilities, multi-purpose ball field, and a river barrier.  Birding has become a popular past-time at the park and is Site CTC 038 on the Great Texas Coastal Birding Trail. Lions/Shelly Park is currently closed due to damage from Hurricane Harvey in 2017.