The most prominent symbol of Bayside, Texas seen by travelers as they skirt this small costal hamlet on state highway 136, is Crofutt's Sandwich Shop and Bakery. Many make it a point never to pass through Bayside without stopping for at least a loaf of their unusually delicious bread.

As well as a haven for weary travelers, Bayside, located on Copano Bay, is also noted as a stopping-off place for hummingbirds, waterfowls, and wading birds.

Bayside boasts a magnificent pier as a result of a recent matching grant from the Texas Parks and Wildlife Department . 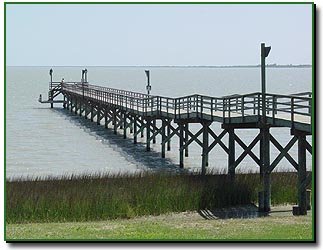 The pier, a favorite of local fisherman, is adjacent to a well groomed park complete with picnic tables and a children's playground.

Near the pier is a state historical marker recognizing Alonzo Alvarez de Pineda as the first European to explore and chart this area of the Texas coastline. In 1519, his expedition penetrated major inlets and mouths of rivers in the Coastal Bend, including Copano Bay.

The most spectacular and historic structure in Bayside is the old John Howland Wood Mansion, located just behind the new pier. The house was built in 1875. Timbers for the large, two-story, classic revival structure came by sailing vessel from Florida to the then thriving port of St. Mary's, just two miles to the north of Bayside. The two porches or galleries in front, supported by tall columns with classic entablatures, mark it as Greek or Colonial revival. There is a widow's walk or gallery on the rooftop. Open fireplaces were originally located on both floors and on both sides of the house. 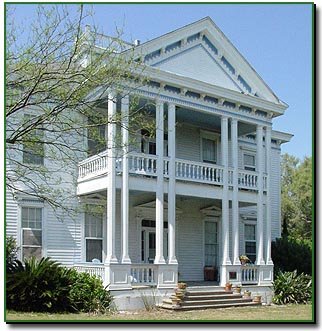 daughters, all of whose marriages took place in a chapel set aside inside the house in 1875.

Major Wood had come to Texas in 1835 from his home in New York with the New York Battalion. He participated in the Battle for Texas Independence at San Jancinto, April 21, 1836. He was stationed in Victoria in 1836 and acquired his first ranch near Edna in 1838. In 1861 he was commissioned as

Lieutenant Colonel in the Confederate Coast Guard and served throughout the Civil War.

The house eventually became the property of Philip Cook and was known for many years as Cook's Hotel in Bayside. It was a popular summer resort on the bay for area residents. The house now belongs to the Michael Selzers.

Arguably the most famous woman from Texas was Clara Driscoll who was born on the Northern edge (map item 5) of present day Bayside (then St. Mary's) in 1881. Known as the "Savior of the Alamo", her ancestors were among the original Irish Catholics that settled the area. By the time she was nine years old her  father had already accumulated a fortune. Consequently, she had access to the finest

eduction abroad and returned with a deep and abiding appreciation for history and the importance of preserving historic sites.

Upon discovering the disrepair of the Alamo and the fact that it might soon be turned into a hotel, she worked with the Daughters of the Republic of Texas to acquire the property and personally paid most of the purchase price herself. The property was then donated to the state of Texas to become the revered site it is today.

After Clara Driscoll's untimely death in 1945 it was discovered that she had bequeathed the bulk of her family fortune to the Driscoll Foundation Children's Hospital in Corpus Christi. The hospital continues to operate and is considered one of the finest children's hospital in the country.