Located in Heritage Park (U.S. Hwy 77 and West Street), the Refugio County Museum was built to suggest the log cabin style houses typical of the Texas pioneer days. The permanent exhibits trace the history of the area, from the establishment of the Spanish Mission to the immigration of Irish settlers; and the impact of

Visitors claim as a favorite a collection of bronze sculptures by Western artist Frederic Remington on permanent loan from owner Jack Kelly.

Many photographs are on display from the late 1800's and especially in the early "boom" days in the oil fields. Information on the old Spanish mission and the local Indian tribes is especially interesting.

Information is also available on the exploits of military leaders King and Ward in the Battle of Refugio and the subsequent massacre of King's men in Goliad. That massacre later became one of the rallying cries of the Texans in their struggle for independence from Mexico.

A collection of memorabilia of baseball great Nolan Ryan, who was born in Refugio, is also on display at the museum.

Directly behind the museum is the Linney-Huson house. Built for John Filmore Linney in 1876, the house is in the Greek Revival style popular before the 1880's. The lumber came from the seaport at St. Mary's by horse-drawn cart. Long-leaf pine and cypress were used in the construction of the structure.

The house originally consisted of twelve rooms, three porches, and a breeze way. The six room house that remains was the original home; however, a six-room addition has been added to the back. The house is a sterling example of regional architecture from the period before 1880, it is also one of the few local structures that have survived over a century of South Texas weather and hurricanes.

The house remained the home of the John Filmore Linney until his death in 1924. His wife continued to reside there an additional twenty-two years until her death in 1946.

The old house was bought by Hobart Huson in 1948 and remodeled without disturbing the basic features. The main house was moved to Dawgwood grounds (intersection of Ymbacion and Oak Streets) for preservation. After Mr. Huson's death (1984), the building was donated to the Refugio County Historical Society and moved to its current location.

The muzzle Loading Shotgun below belonged to George Strauch, a local builder and business owner, who built several of the old Homes in Refugio and the current Our Lady of Refuge Church building in 1900. 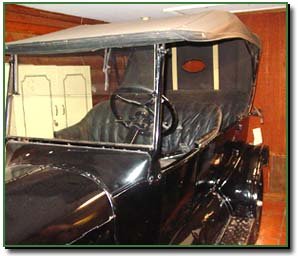 This is one of the four bells that once graced the bell towers of the Mission Nuestra Senora del Refugio. The mission was damaged during both Wars for Independence, the War between Mexico and Spain and later the War between Texas and Mexico.

Years after the wars the bells were hauled to Victoria as scrap, two of the bells were broken. While on the trail to Victoria the cart the bells were on became stuck in the sand at the San Antonio River, the bells and the cart were abandoned. Later Nicholas Fagan found this bell and put it in his family chapel. After serving as the bell in several chapels the bell was Donated to The Refugio County Historical Society by Ms. Kathryn Stoner O'Connor.

This hat was used in the Broadway Stage Production of "Hello Dolly" It was first worn by Carol Channing. She gave it to Pearl Bailey as a good luck present who starred in the first Black-Cast production of the play. Ms Bailey donated the hat as a door prize at a charity fundraiser in Houston in the 1960's. It was won by Nell Meier formally of Bayside who has donated it to the Museum. 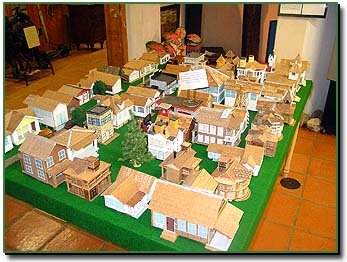 Refugio Main Street - These Folk Art Buildings were all made by Mr. Seward Richardson. He built these buildings as he remembered them looking in the 1920's. As a hobby Seward also made a number of other buildings.