Austwell is known as the "Gateway to the Aransas National Wildlife Refuge." The city of Austwell is located on State

Highway 239 in Refugio County.  Accessible by exiting State Highway 35 or FM 774, Austwell sits atop a natural bluff overlooking beautiful Hynes Bay, which is part of the San Antonio Bay ecosystem. 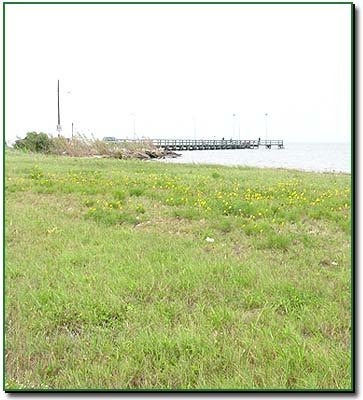 The city of Austwell has many fine homes: many of the old historic homes having been brought back to life with modern conveniences. (Shown below is the old Murphy house.) Developers are currently expanding Austwell making provision for new, upscale homesites.

Austwell is part of the Austwell-Tivoli ISD, which is a 1-A school district. The school provides an excellent educational opportunity by supporting a low teacher/student ratio.

A far sighted businessman who contributed much to the development of Austwell was Preston Rose Austin. After achieving prominence as a stock raiser, Austin became a partner in the Refugio Land and Irrigation Company which acquired large landholdings in the Austwell area in 1902. Austin conducted a series of agricultural experiments and determined (with the help of John Kinsler from South Carolina) that the land of the area was best suited to raising cotton. As a result of this decision, the land was divided into 160 acre parcels and sold to German and Bohemian farmers.

Austin then formed two towns, Tivoli and Austwell, to serve the needs of the settlers. The town of Austwell was named as a combination of Austin’s own name and that of his partner, Jesse McDowell and was platted in 1912. In 1914 an election was held in which the citizens of Austwell chose to incorporate. This was followed promptly by the approval of the Refugio County Judge and the Texas legislature.

Originally there was no rail or port service near Austwell, so plans were made to build a sea port along with a cotton gin on the bluff near the site of the proposed port; however, Austin and his associate financed a branch line of the St. Louis, Brownsville,& Mexico Railroad. This rail service to Austwell caused the proposed cotton gin to be moved to a location closer to the rail line and the plans for the sea port to be abandoned.

Beginning in 1915 Austin’s company provided Austwell with a Church, school, store, cotton gin, and the modern conveniences of electricity and a telephone system. The school was especially good and many Refugio County residents sent there children to the accredited Austwell school since graduation there all but assured entrance into a college. A hospital was planned but those plans died along with Austin himself in 1929.

In the 1930’s the population of the Austwell area was at its zenith since each little 160 acre parcel generally required two families on the land to work it with mules. By the mid 30’s steam tractors began to be used and by the early 40’s the conversion was complete.

In the 1950’2 Austwell boasted two restaurants, 3 grocery stores, 2 gas stations that also sold and delivered bulk fuel, and two tractor dealerships. It was also in the early 50’s that Austwell and Tivoli consolidated their school systems with the high school located in Austwell and the elementary school in Tivoli. In 1955 a new high school was built in Tivoli and by that time there was an elementary school in both towns. By the 1990’s all schools had moved to Tivoli.